Building a good working environment is very important for your productivity. Maybe it takes a while to configure, but when it’s well done it’s worth the time!

For example, virtual environments help you have your packages organized and controlled, and a good text editor helps you with variable names, package methods, and syntax highlighting.

Oh, and If you didn’t read the introduction, this Django tutorial is up-to-date. We will use Django 1.8 and Python 3. This doesn’t mean you can’t follow the tutorial if you are using an older version 😉 It only means that you will have to work harder in your debugging, to solve problems I can’t anticipate here.

To follow this Django tutorial you will need Python3, the package manager pip3 and the following packages: virtualenv and virtualenvwrapper. 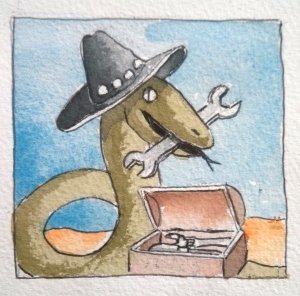 If you’re using Mac OS X you can check this post:
Install Python 3 on Mac OS X and use virtualenv and virtualenvwrapper

You will also need a nice text editor to manage all the Django files we will create. I recommend Sublime Text but if you feel comfortable with another text editor go ahead! Check here on how to install and configure Sublime Text 3 for Django.

Although we will talk about this in the next post, we will need Git, the package control system. If more than one users will be managing the code, I recommend you use a Git repository like GitHub or Bitbucket (the last one offers private repositories for free accounts). You can learn the basis about Git on this Git Tutorial.

Ok, now we are ready to start with our super-cool Django project 😉

First, we will create a virtual environment with Python3 as the default Python. In your terminal, type:

Change your python path if its different than mine, and also change the name of the virtual environemnent tb_dev if you like. You’ll see that this virtual environment is now active — the command shell will have something like (tb_dev)[user@host]$.

You can deactivate the virtual environment with

and activate it again with

Note that if you are working in this environment, when you type python you are activating python3, and when you call pip, you are calling the python3 version, pip3. Cool!

Ready to install the latest version of Django?! With the tb_dev active, type:

Note: you can check if there is a new version available here.

Create a new folder in your computer, named taskbuster_project:

Let’s create a Sublime Text project to manage all the files inside this folder (or with your preferred editor). Here, I will assume that you have activated the subl command to open files using the terminal:

I am reading an incredible book: Test-Driven development with Python, by Harry J.W. Percival. And it says that you must obey the Testing Goat — a little voice in your head that tells you to write a test before writing any code. Test first, test first! 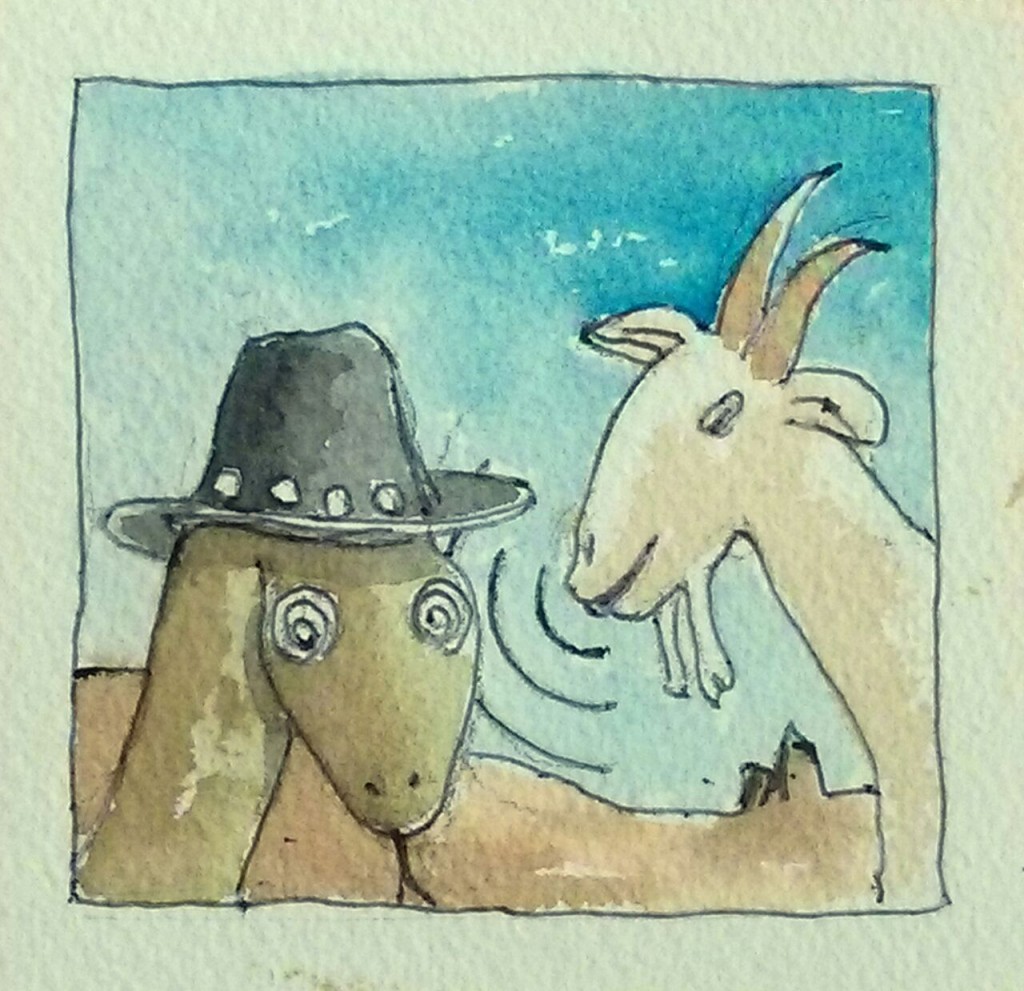 And this is what we will do here, before creating any Django project…

We know that when we create successfully a Django project, we get the usual It worked! Django blue page when we go to the localhost http://127.0.0.1:8000. If we inspect this page, we will see that in its head section, the title tag is <title>Welcome to Django</title> I know, you can’t see that because you haven’t created any project yet! You will have to trust me for now 😉

So let’s write a test that asserts than when we go to http://127.0.0.1:8000 we get a page with Welcome to Django in its title. Of course, this test will fail, because we don’t have any project defined yet! But that’s what’s all about: create your test first, and then the code.

First, we will create another virtual environment for testing, with Django 1.8 in it:

Next, in order to simulate a browser for our testing, we will use the Selenium package (before installing it you will need to have Firefox):

Go inside the taskbuster_project folder and create a folder for the functional tests. This folder will contain all the files that test the project functionality from the user point of view. Create also the file all_users.py in it:

Edit this file with your editor and write:

Let’s run this script with

The resulting output shows how the test, obviously, fails. You will see something like

and an AssertionError with the message Welcome to Django not found.

So let’s create a Django project and make this test pass!

Get inside the taskbuster_project folder and type:

Note the dot at the end of the command, this will create the project taskbuster without creating any additional folders. The current structure of your top folder should be: 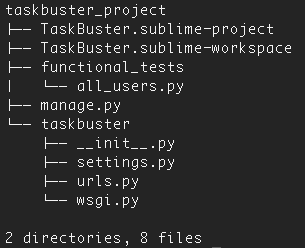 Note: this picture shows the output of my terminal when using the tree command (if you want to use it, you may have to install it first).

As you can see, we have created:

Later in this tutorial, you will see that the taskbuster folder will also contain all our apps, templates, static files and other files related to our project.

Once we have the project created, we can start the development server. Open a tab in your terminal with the tb_dev environment activated, go inside the taskbuster_project folder and run

You might see a warning about migrations, but don’t worry, we’ll get to that latter in this tutorial. At the end of the output you might see something like

You can open a browser and check this url to see the It worked Django message, but I rather prefer to use the test we have created 🙂

Open another terminal tab (with ctrl+t or cmd+t) and activate the tb_test envrironment. Now, let’s run our test:

And now you should see the message:

indicating that your test passed! 🙂

Now it would be a good moment to start a Git repository and start the version control of your code. However, before going into that we need to talk about Security. We want to keep the Secret Keys out of the version control, to maintain them… Secret!

And you will learn how to do that on the next part of the tutorial, Settings files and Version control